Plant a tree in memory of Clair
An environmentally-friendly option 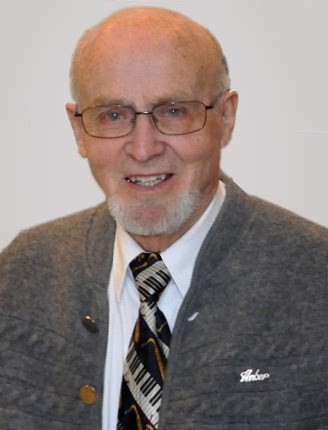 Clair Doney Woodward’s final wish came true on April 5, 2021 when he reunited with the love of his life, Geraldine “Jeri” McBride Woodward. Jeri preceded him in death in 2016. Born in Franklin, Idaho to Ivan and Ordell Doney Woodward, on September 24, 1928, Clair was one of the last two surviving grandchildren of William Woodward. Clair’s grandfather was born in England in 1833; converted to the Church of Jesus Christ of Latter-day Saints (LDS); emigrated to the United States and crossed the plains with the Willie Handcart Company in 1856. Jeri loved to tease Clair, “you can take the boy out of Franklin, but you can’t take Franklin out of the boy.”

Clair loved his family, music, sports, and tuning pianos. Clair's musical career began when he was in 1st grade and sang a new hit, "Santa Claus Is Coming to Town," at a church Christmas program, after his mom promised him a new pocket knife. As a teenager at Franklin High School, he played saxophone, quarterbacked a 6-man football team, played basketball and softball, was salutatorian, and class president. Growing up on a farm through the depression, Clair learned to fix any and everything.

He attended Utah State University and served a 2-year mission for the LDS Church in the Central States Mission (Arkansas, Missouri, and Oklahoma), bringing his beloved saxophone with him. Following his mission, Clair met Jeri and married her on July 28, 1952 in Logan, Utah. After earning his BS and MS degrees in music, his first job was teaching band and orchestra in Tremonton, Utah.

Participation in ROTC led Clair to active Air Force duty at Lackland Air Force Base in San Antonio. He organized the base’s first drum and bugle corps which is still functioning today. He captained Lackland’s fast-pitch softball team as catcher. He led the team to the San Antonio City Championship, with a league leading .555 batting average. Clair moved his growing family to Boulder, Colorado where he completed a Doctor of Education in music at the University of Colorado.

Nevada became home when Clair took a job as the band director at Elko High School. Clair’s band played for the opening ceremony of the 1960 Winter Olympics in Squaw Valley, California. He moved his wife, six children, and two dogs to Terre Haute, Indiana in 1967 where he became the Director of Music Extension and Independent Study at Indiana State University. He also oversaw the Indiana State Music Association vocal and instrument competitions as well as Summer Music Workshops. After 27 years at ISU, he retired in 1994.

After a day of work, Clair was often seen in the front yard playing ball with his children and neighborhood kids. He was famous for his homemade root beer, making thousands of gallons over his lifetime. He loved everyone, and his home was often full of visitors from all walks of life. He enjoyed piano tuning for the next 25 years which took him to several states. He continued repairing, fixing, and supervising repairs into his nineties. Clair played saxophone in a number of bands for nearly 75 years, including: Jim Dailey Band, Stonehenge, and Terre Haute Community Band. In 2013 he was inducted into the Wabash Valley Musician’s Hall of Fame.

He served many years as a leader in local and regional capacities for the LDS Church and spent countless hours helping others. He was the last Branch President and first Bishop of the Terre Haute Ward. Clair also served as Stake Patriarch. Clair and Jeri loved traveling. He visited all 50 states, Canada, Germany, Ireland, England, Wales, Italy, and Czech Republic. He always looked for opportunities to practice his life motto, “to leave the world a little better.” Clair will always be remembered as a kind, caring, gentle, loving, Christ-like man who could fix anything.

Appreciation and gratitude are expressed to Greiner Funeral Home. Clair will be buried with his wife in the Hyrum Utah Cemetery.

For more information about access to the funeral and other tributes, please send your name and a note of interest to clairwoodwardmemorialservice@gmail.com

Plant a tree in memory of Clair by clicking here.
To send flowers to Clair's family, please visit our floral store.

Plant a tree in memory of Clair
An environmentally-friendly option

Plant a tree in memory of Clair

9 trees planted in memory of Clair

We love your family so much. We are holding you in our prayers. With love from the Hollis Johnson family: Carol, Wayne, Lyle, Charlotte, Lise, and Richard.”
Hollis Johnson Family

From Tatiana Svetlanova with Love

What years did he teach in Bothwell Utah .......I attended there and  might have been in the school or just barely left ......we might have crossed paths........who knows?

Wishing you peace .
The Hummel family

A Memorial Tree was ordered in memory of Clair Doney Woodward by The Hummel family .  Plant a Tree

Wishing you peace and comfort. Memories live on forever.
The Warren Family

A Memorial Tree was ordered in memory of Clair Doney Woodward by The Warren Family.  Plant a Tree

Plant a tree in memory of Clair